We were successfully able to reference TSQL scripts with multiple go statements in v4.4.0

We just upgraded Liquibase to 4.16.1 and nothing is working anymore. We cannot deploy the vast majority of our SQL scripts due to the following error:

Our scripts are structured as follows:

Could someone please provide assistance?

I’ve just tested the endDelimiter=“GO” using the latest product release 4.16.1 and I didn’t face any issues.

I also checked the release notes and there was a bug fix related to endDelimiter( * Improved handling of endDelimiter=“/” by [@nvoxland] in [#3118]) that might be connected to your issue, I highly suggest you upgrade to the latest product version and test your script once again.

Here is my output: 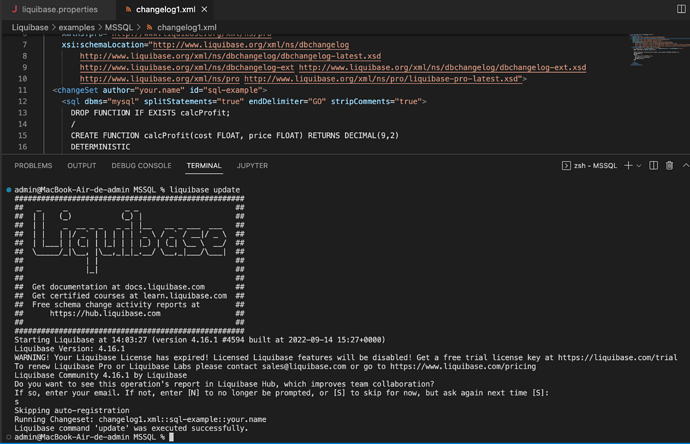 We have released an update to 4.16 though and as @raul.balestra said there was a bug fix in the most recent release that will probably resolve this for you.

I also found an accepted answer on StackOverflow that addresses this issue:

This issue was addressed in two ways.

Thank you for your answers and I apologize for mis-stating the version.

Some of our scripts with multiple go statements are working while others aren’t. I suspect there is a bug somewhere. I don’t believe this particular error should ever happen since SQL Server should never see those “GO” statements which are for the client only.

I am trying to find a specific example to send to you guys. The one that fails create is a large 10 MB script and I cannot share it unfortunately.

Thanks again for the assistance
-Xavier

I found what the root cause is: It is due to the following change: Do not split SQL on delimiters within BEGIN/END blocks by nvoxland · Pull Request #1589 · liquibase/liquibase · GitHub

Several of our stored procedures have explicit database transactions. Transactions in TSQL are written using BEGIN TRAN and either Commit or Rollback. There is no “END”. e.g

I believe that your code does not work with database transactions in SQL Server.

We downgraded to 4.14.0 and everything works.

is this an issue that will be prioritized and addressed in future releases?

Hi @xvc - the nvoxland who opened that PR is one of our founders and works on our community team to address these issues, so I am sure it will be reviewed by the team and prioritized/assigned as soon as we can. Thank you for asking, and thanks for posting!

Edited to add: This was Merged and released in version 4.15.0.

@xvc That make sense, thanks for picking up the BEGIN TRANSACTION thing. I’ll open an issue for that so it can get looked at.